Raven is one of the main protagonists in the Teen Titans series. She is also known for her respective appearances in other media as well.

Raven (human name Rachel Roth) was born in Azarath, a faraway location of a different world. She is the daughter of Trigon, a demon lord, and Arella, a regular woman. During childhood, she was taught magic and spiritual techniques by a mystic leader named Azar. She was taught to control her emotions and to keep her demonic and evil energy away from her mind. She later joins the Teen Titans, a group of teenage superheroes to help stop evil, to fight off villains and other bad forces.

Raven is a slender and slim teenage girl with average height and weight for her age. She stands at 5'4" and is the 2nd shortest titan.

In Teen Titans, Raven wears a long dark blue hooded robe and a black rubber leotard. She has greyish skin, purple hair, and large purple eyes. In her demonic form, she has four slanted red eyes. In Teen Titans Go!, she has black hair instead of purple.

In Injustice: Gods Among Us, Raven has more blue-ish skin and has a far more masculine voice. She wears a blue leotard and wears thigh-high boots. She also has claws for hands instead of regular human hands. In DC Comics, Raven has the exact same appearance, except with regular Caucasian skin color and no claws.

Raven is one of the most mysterious characters throughout the series. She is quiet, emotionless, studious, and sarcastic. She can always come up with a witty remark, specifically in reply to most of Teen Titans' antics and attempts at humor. Her appearance and attitude appear to be that of a typical modern goth female. However, as much as she may seem slightly distant and anti-social, producer Sam Register describes her as a "...dark character, but a character everyone can relate to. She's a recluse and sort of to herself. We thought that would be a good dynamic with the rest of the team. She does have a dark background in the comic.

Beast Boy Raven and Beast Boy have a love/hate relationship. Raven is the least similar to Beast Boy and it was stated that they are "opposites" in terms of personality due to the fact that Raven is collected, down to earth, and cold, while Beast Boy is cheerful, laid-back, and energetic. They often fight and get on each other's nerves: Raven's cold demeanor and "creepiness" annoy Beast Boy and she is often irritated by his bad jokes and immaturity. Although, in the beginning, they have a rough relationship, they become closer later and focus on their developing friendship. 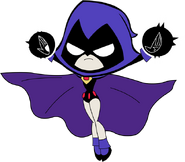 Raven as she appears in Teen Titans Go!

Raven as she appears in Injustice: Gods Among Us

Raven as she appears in DC Comics
Add a photo to this gallery
Retrieved from "https://cartoonnetworkcn.fandom.com/wiki/Raven?oldid=5777"
Community content is available under CC-BY-SA unless otherwise noted.